W. C. Heinz, simply called Bill by friends, family, and colleagues, was perhaps the lesser known of a literary cannon of sports journalists: A. J. Liebling, Red Smith, John Lardner, and Grantland Rice, but the most influential. A craftsman of the written word whose use of detail plucked the reader into the middle of a story whether he was writing about boxing (The Professional), football (Run to Daylight with Vince Lombardi), the war from the frontlines or a surgeon during the Korean War (he wrote the novel M*A*S*H under the pseudonym Richard Hooker), Heinz brought a descriptive, personal feel to his writing, influencing generations of writers, journalists and novelists, including David Halberstam and Jimmy Breslin. Ernest Hemingway wrote that “The Professional is the only good novel about a fighter I've ever read."

Bill Heinz and boxing trainer Ray Arcel remained close friends since the days when Heinz began pounding the keys of his Remington (one loaned to Hemingway) 50 years ago. Arcel, the legendary trainer of more 2,000 fighters and over a dozen world champions, handled so many of Joe Louis’ opponents he given the nickname “The Meat Wagon.” Two years before his death in 1994, Arcel and his wife, Stephanie (Steve or as Bill referred to her, Stevie), suggested that I write to their old friend. The advice from a master whose keen eye for detail and reflective modesty holds its own as a standard for writers. Bill Heinz died at the age of 93 on February 27, 2008.

Postscript: Stephanie Arcel, who died in 2014, would have loved this new book, The Top of His Game, by Bill Littlefield, and I have no doubt that copies purchased for friends would send this book into a second or even a third printing. To commemorate the book, I've added this postscript and two photos - one of a small collection of Bill's books, ones that have been read to pieces when I covered boxing and after - and the newest collection. Thankfully, he and his work have not been forgotten and hopefully, he'll pick up a few more followers along the way. 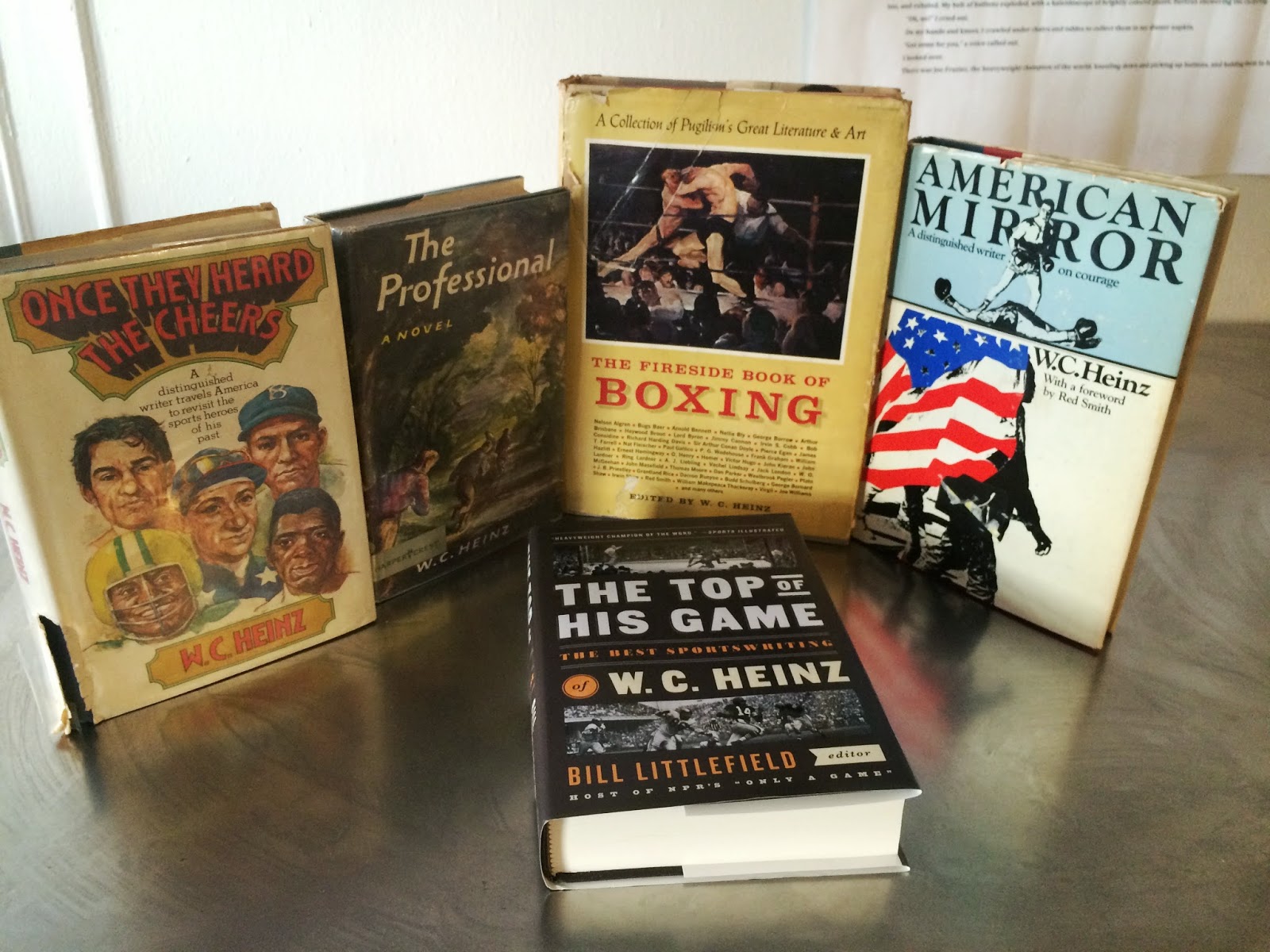 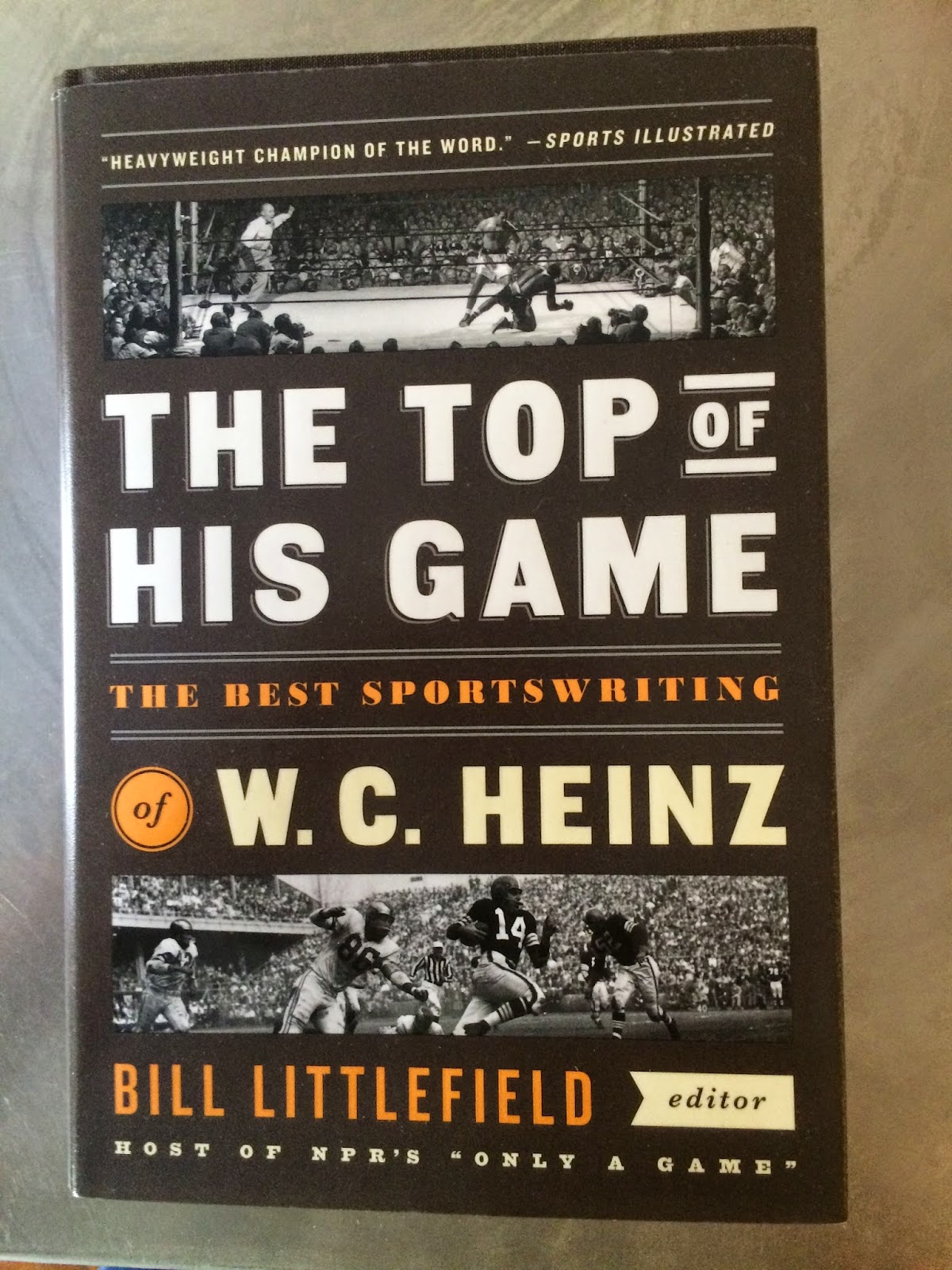 Naturally I'm pleased that you find something of substance in the product I have been turning out of this Remington portable since 1932. I don't know what help any advice from me will be, but I'll try by the numbers (which relieves me of the task of building those paragraph bridges which are so important in giving a piece of writing its flow).

1. It has been said that writing is like painting, I guess--can't be taught, but can be learned. Hemingway said he learned by reading the greats he admired and studying what they did to create the emotion, or emotions, that moved him. In other words, the science precedes the art.

In my own growth process I derived much from reading John O'Hara's short stories for dialogue, and Hemingway for scene setting, the placement of the characters in it and, of course, the dialogue that identified and distinguished them.

2. Writing is show-and-tell, and "show," when possible, is far preferable than "tell." Anything anyone tells is suspect, while if the readers is brought to believe he has seen and heard it himself, he is a believer forever. Too many writers get between the subject and the reader, so whenever possible the writer should get out of the way.

3. Back to role models: A half century ago I used to ski, and found that when I followed the instructor down the slope my form flowed much better than when I was on my own. I think that in trying to find one's own style, one should find in one's reading the style, or styles, with which one feels most comfortable, and then follow that as I followed the ski instructor. Of course, at the beginning, one will be just an imitator until gradually one's own self emerges in one's own style. Critics like to sneer at this, but the French impressionist painters all borrowed from one another and learned from one another in finding their own way.

4. When, at the end of WWII, Milton Gross was given a sports column by The New York Post, he asked Red Smith for advice. Red said: "Be there." Being there means not only being in attendance, but with eyes and ears at the ready. Too many writers don't really look or really listen. Look and listen for the distinguishing ingredient. Many years ago Stevie Arcel, in talking about "The Professional" mentioned (in the opening chapter) the flower pots on the tenement fire escapes, the yellowed leaves of the Easter lillies and the pink foil still around the pots a long time after the shouldn't be there any longer. She said: "That tells the whole story of tenement life." Of course. That's why I put it there. Now, Stevie may be the only reader who caught that, but I caught it and every good writes first for himself or herself.

5. The space problem: I know what you're going through, and I don't know any answer except to write as tight and right as you can. Even now, when every couple of years or so and I do a piece for The New York Times sports section, they'll call and say: "We've got to take out six lines." My reaction, although I can't say it, is: "Take it out of the white space around the goddamn drawing." So, you see?

6. Grammatical note: The proper verb form is to "try to" and not "try and." Anyone who ever tried and put it in the past tense got a sentence like this. Don't feel badly. Some of the highest priced heads talking heads on TV make the same error. Somewhere here I've got three or four single-spaced typed pages of grammatical errors made on the networks by their reporters, anchor people and commentators. When I was doing an occasional piece for TV Guide I sent them the casualty lists and asked for suggestions as to how it might be made into a piece. They said their readers wouldn't care. The point was that they didn't care.

7. Sometimes the dice come 7 and here I am. In closing, I can only say that whatever I have to say is in my work, and if you can find Once They Heard the Cheers you'll find a lot of "how-to" there. To you and your work I send my