The Bronx is Burning 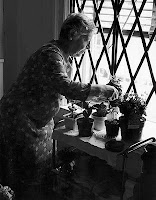 “Next time, only give me one.  Go take some for yourself.”
I rose from the couch and poured myself a glass of ginger ale from the kitchen, the cool, sweet drink a welcome relief from the temperature inside the apartment.
I excused myself to use the bathroom and to splash cold water on my face.
"Make sure you turn on the bathroom light,” Auntie Esther warned me. I groaned.
“No, I’m going to sit here in the dark,” I muttered to myself.
As I fished around for the end of the roll of toilet paper, I noted that my aunt washed her clothes by hand in an enamel bathtub, the water emerging from a circular hairbrush style faucet suspended from a ceiling pipe. It looked like a set from an early silent movie. The apartment hadn’t been painted in at least fifteen years but since Auntie Esther didn’t wear her eyeglasses, it all looked in mint condition to her.
Opening the bathroom door when I had finished, I found her staring at the door as I made my exit.
“Make sure you turn off the light,” she told me. I groaned and turned off the light.
Auntie Esther looked at me.  “You’re getting old,” she sniffed.
“So are you,” I replied.
I looked at my watch.
“Auntie Esther, I just checked in to see how you’re doing. I want to know that you’re all right. But I can’t stay,” I told her.
“WHAT?” she shouted.
“I CAN’T STAY!”
“Why?  Do you have a date?” she inquired with a chuckle.  “Get one for me.”
“I HAVE TO GO! I have work to do at home. I’ll see you next week,” I said, grabbing my pocketbook and moving the police lock to scramble out.
As soon as I turned the key in the lock of my apartment door, the telephone rang. The answering machine turned on before I could reach the phone.
“Cough, cough.  Hello (pause) Arlene. This is her Aunt Esther. Tell her to call me when she gets home. Did you hear me?  Okay? Thank you.”
When she died, over 10 years ago, I wished I had saved the tape from the answering machine so I could hear her voice again.
Email Post
Labels: Bronx Deep River Grand Concourse Greek Jews Jerome Avenue Kingsbridge Road Liberace Photographs copyright Arlene Schulman University Ave

George Molé said…
Hello? Please tell Arlene that the story about her Auntie Esther is lovely. Did you hear me? Auntie Esther and all the women like her were the fabric of this city (or perhaps the plastic slipcovers protecting the fabric). As we lose them, we become less than we were. God bless Auntie Esther! Will you tell Arlene I said so? Hello? Thank you.