A Tribute to Bill Gallo

(Note: due to technical issues with blogspot.com, this item has been reposted)
As a kid, the New York Daily News was always on our kitchen table even when my mother served the same frozen dinner night after night, at a time when people discussed the latest headlines and when subway trains were littered with discarded newspapers. I read the paper back to front; the sports pages were a telescope into our society with the drama of a novel and the plot devices of a film noir picture.
Bill Gallo’s cartoons were clipped and taped to my bedroom wall when I was a teenager. There was Basement Bertha and Yuchi and George Steinbrenner, Billy Martin and Muhammad Ali above my dresser. His cartoons were commentary stripped down to the basics of fine lines and wry and often moving editorializing. These were left behind when I moved out of my parent’s home when I was 19.  But I still carry them with me. 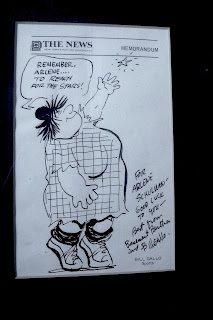 A year later when I was 20 and on my own and still unformed and uninformed, curiosity pushed me to the telephone. He answered his own phone. “Mr. Gallo, you don’t know me but I would like to meet you,” the words rushed out. He invited me for a visit in his office at the old News building on 42nd Street with the world revolving in the lobby. Courtly and with a great head of shiny black hair, he showed me his workspace, the implements of his trade in metal cans, and offered a tour of the newsroom. Unfortunately, I don’t remember much of the conversation and wish a photograph had been taken as evidence of our encounter. Bill left me with a sketch on Daily News memo paper of Basement Bertha reaching for a star with the inscription, “Remember, Arlene. . .to reach for the stars!” And that I did.
A few years later, whenever we would meet at a sporting event or Boxing Writers luncheon, Bill wearing one of his trademark bow ties and I wearing some semblance of a matching outfit, I would remind him of our meeting.  With a friendly tap on the arm you’d give an old buddy, he always added,  “You’re doing great,” and “Wonderful photographs” and “Great story.” Ten of us couldn’t come close to matching the history of his life. But it was his respect, his modesty, his humanity, his fondness for others and his love of people and his work that shone like an incandescent bulb and that makes him absolutely irreplaceable.
So as the plunderer of principles, my indebtedness to Bill Gallo is beyond value, with his having left a little bit to all of us of what it is like to be a person of honor and integrity and generosity of spirit as we contemplate our presence in the world.
Email Post

George Molé said…
This is a lovely tribute to the great Bill Gallo. His was the voice of an older New York, and there's no voice like it left. He knew everyone and had seen everything, but never became cynical--to him, sports was always about kids playing in a vacant lot, dreaming of being like their heroes someday. And he was a hero himself, a Marine who fought in the South Pacific. He had a long, rich life, but with someone like that, no matter how long you have them it's never enough. RIP.

room divider nyc said…
Thanks for this I'm actually looking for blogs/articles on this.
9:41 PM