A Victory for School Lunches

No matter how early it is in the morning or how late the hour of the afternoon, deep musky notes of an unmarketable perfume remain stuffed at the tips of my nasal passages. It isn’t a gentle wafting of lightly scented flowers, or a flowing breeze of grandma – ma’s mouthwatering cookies or the acrid nose pinching smell of ammonia.
It was the odor of thousands of public school lunches from many yesterdays, of boiled hot dogs and over boiled red baked beans poured from industrialized drums of institutionalized food bleached into pale cinderblock walls and floors of the cafeteria and in my nostrils. With the heat turned up during the clammy winters at Brooklyn’s P.S. 306 in East New York, these dark funky smells were released like heavy clouds of ozone that couldn’t be brushed away.
Hot dogs and beans were not part of my diet because my mother felt that her lunches were better than the culinary treats of the government sponsored lunch program. And it was cool to carry a lunchbox. We lived in the Linden Houses in the East New York section of Brooklyn and my mother, her hands full with three kids under the age of six, packed the same sandwich into my lunch box every day: one slice of bologna and one slice of American cheese stuck between two slices of Wonder white bread or oily tuna fish stirred into mayonnaise and tossed between two slices of, you guessed it, Wonder white bread. One of my best friends was Donna Miller and she and her mother were most sympathetic to my troubles. Once a week or so, Mrs. Miller would pack her daughter’s own lunchbox with an extra tuna sandwich on a roll. To this day, I’ve never had better tuna. My own sandwich was ditched with a one-arm shot into the nearest trashcan.
A glass thermos fitting neatly into a Barbie or Snoopy metal or plastic lunch box was filled with sticky and sweet Hi-C fruit punch or replaced by a can of chocolatey Yoo-Hoo, my favorite. And off I went to P.S. 306 for seven years, trudging through snow, running through rain, and skipping along with my friends, with my lunch box in hand. 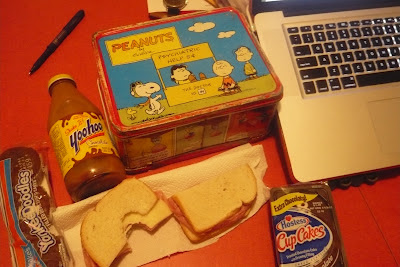 I do. As for me, I still refuse to eat hot dogs and beans, remain traumatized by those bologna sandwiches, still search for tuna sandwiches as delirious as Mrs. Miller’s, and I find myself acquiring new plastic lunches boxes filled with compartments that I use to store buttons and thread. And when it’s late at night and I’m thrashing out an idea while writing, there’s nothing more comforting than running out to the corner bodega for a sandwich, a package of Devil Dogs or Twinkies or Yankee Doodles washed down with a Yoo-Hoo.  No bologna here, literally, figuratively and metaphorically.
As long as everything, including words, is in its proper place, I can begin.
Author’s Note: The Peanuts lunchbox in the photo is not part of  my childhood but a recent eBay purchase.  I wonder how many childhoods this lunchbox passed through. Due to circumstances beyond my control, several sandwiches and bottles of Yoo-Hoo were consumed before the photograph was taken. And due to the author’s perpetual aversion to bologna and to a lesser extent, American cheese, genoa salami and provolone were happily substituted in the photograph. I am thrilled to report that Hostess cupcakes with swirls and the Yankee Doodles pictured here are just as tasty as I remember them, but seem a bit smaller. Perhaps I am a bit larger. The Yoo-Hoo, still boasting to be a good source of vitamins and minerals, now comes in a glass bottle. An extra day at the gym has been added to my routine as a result of this essay.
Email Post
Labels: Hostess NYCHA PS 306 School lunches