Standing squarely in front of a LeRoy Neiman painting, you can get lost in the commotion of paint, chaos of movement and bold lines of brilliant color which suggest that the whole mass is about to leap off the paper. As one of the most recognizable artists in American history, Neiman himself is made of bold lines, topped by a fedora, cigar in one hand, and sketchbook in the other.

He painted and sketched the times of the fifties through the twenty-first century in a riot of color and complexity, not only an artist but as a documentarian. Like the early painters who painted scenes from the lives around them before the birth of the camera, Neiman preserved scenes of other people’s lives in oils, enamel, watercolor, pencils, and pastels. He painted and sketched the sports scene from boxing to golf to baseball, basketball, horse racing, and hockey;  Frank Sinatra, Muhammad Ali, Norman Mailer, Red Smith, the Olympics—this listing could go on for a few pages. In the seventies and eighties, running into Neiman at a sporting event was inevitable.
We crossed paths in the boxing world when I covered the sport, and in this world of cantankerous managers and quirky prizefighters, when you ran into someone twice you were old friends.
Neiman sat ringside sketching the fights as I pounded on my laptop sending victories and defeats on deadline to newspapers. I interviewed him a few times at his home or at a boxing match between sketches. He offered a sketch or two to his subjects and at some point, I realized that he hadn’t sketched me. Well, I must do something about this.  At 25, I had a lot of chutzpah.
A telephone call was made to his assistant, Lynn Quayle. Only a few women attended the fights in New York in a professional capacity so we knew each other. I not so humbly asked if I could photograph LeRoy in exchange for a sketch.
“Of course,” was the answer, without hesitation. 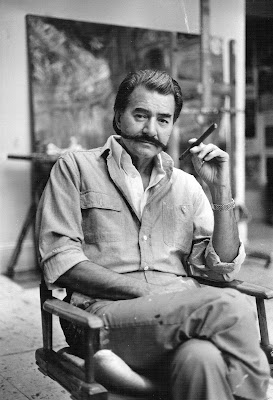 He posed, of course, with his cigar looking like, well, LeRoy Neiman, in his studio in the Des Artistes building on the upper West Side. Now that I think about it, I don’t know if he ever smoked that cigar. He and Lynn treated me like the famed photographer Margaret Bourke-White, not as a young upstart in the journalism world.
Neiman sketched me and I returned a few weeks later with my black and white photograph. I noted that he hadn’t sketched me while I was reporting.
“Well, there’s a reason for that,” he said diplomatically. “You never sit down long enough.”
He was right about that. As soon as the bell rang to end the fight, I ran to the dressing room or press conference for quotes and then back to my seat. The whole routine started up again as soon as the next match was over. We waved to each other as I passed by.
I can recall his voice and its flat Midwestern tones and wished I knew him better and had visited more often over the years. When Neiman began writing his autobiography 20 years ago—it was published just this June—I heard his voice again.
I read his book, All Told: My Art and Life Among Athletes, Playboys, Bunnies, and Provocateurs, while sitting on a bench in the New York Botanical Garden, which happened to be the day of his wake. When I squinted my eyes as the heat rose from the Azalea Garden, there seemed to be a man seated next to me, dressed in a white suit, his black hair combed back with a long, long mustache and holding a cigar. His paintbrush swept over the paper, capturing a landscape of vivid colors. When I leaned over to look over his shoulder, he was gone. Just like that.
Like his art, Neiman’s voice leaps right out of the pages as if he’s having a conversation on a park bench and telling you his story. The man who was accused of being too commercial and who seemed a bit Salvador Dali-ish with his large mustache and trademark cigar writes in conversational style and puts himself in modest perspective to the times and people around him.
He writes of his beginnings in Minnesota, where he hopped on and off freight trains as a teenager during the Depression; his nose pasted in art books in the library;  attending colorful carnivals filled with sword swallowers and the fan-dancing Sally Rand; and watching brave fighters in the streets and in the ring.
“You fought your way out of the mean streets,” Neiman notes. “These guys were desperate – it was either beat your opponents or the lobster shift at Schmidt’s brewery.”
Neiman brings layers of details to his stories, from his Army days fighting in the Battle of Normandy, to studying anatomy at the Art Institute of Chicago to poring over the works of Van Gogh, Cezanne, Bonnard, and Daumier, to the rules of comportment at Hugh Hefner’s Playboy Mansion.
And it wasn’t all about sex.
Ballroom to bedroom, the mansion was filled with interesting characters partaking of the scene. I love hanging out with the guys who drew the Playboy cartoons, like Shel (Silverstein), Jules Feiffer, Harvey Kurtzman, Gahan Wilson, and Arnold Roth. We had TV cowboys, cutting edge satirists, and Hollywood dreamboats in full-time residence. In the breakfast nook, along with your Eggs Benedict, you could share a booth with Bill Cosby, Roots author Alex Haley, the Reverend Jesse Jackson, or Hugh O’Brien, television’s Wyatt Earp.
And there are the stories about Muhammad Ali, Don King, Neiman’s place in the art world, dining at Elaine’s, and living in New York, a city he loved, since 1963.
Neiman died on June 21 at the age of 91. His autobiography landed on my front door a few days later.
And how fitting, just as I should reach the end of the book, Neiman mentions Claude Monet as I sit, yards away from the flower exhibit, Monet’s Garden; two paintings and his palette are also on display. Neiman's voice is so clear coming from the pages that I can hear him speak.
Even more curious is the old character who’s been peeking out from my paintings these fifty-odd years. I remember the first time he appeared, snappily dressed, looking wryly out at me as if to say, “And who are you exactly?’ Ever on the lookout for images as reference for my paintings, back in the ‘60s in Paris, I’d clipped out the photo of a man who caught my eye in an issue of Paris Match. He was a Monet-type gent, white bearded, slightly bent, dressed in black, with a fine walking stick. Every few years I’d insert him into a painting-promenading along the pier at Monte Carlo, on the beaches of Cannes and Waikiki, as a flaneur on the Champs-Elysees and the Boulevard St. Germain, among the crowed at the Kentucky Derby, or at the fights. He got around.
The fact that his doppelganger, the white-bearded Claude Monet, had lived valiantly in Giverny, eyesight failing, prolific until his death in 1925 at age eighty-six, added a fondness and familiarity. Occasionally a buyer would spy my character when purchasing a print, but mostly he was my private amusement-a somewhat eccentric and dashing loner, content with his place in the crowd inhabiting my work. Then on my eighty-fourth birthday in 2005, it suddenly dawned on me. In one way or another, this indomitable old crony had been me all along.
I had hoped to meet with LeRoy Neiman again for a project, conversations with New Yorkers about time. But that was one thing we ran out of.

LeRoy Neiman’s autobiography, All Told: My Art and Life Among Athletes, Playboys, Bunnies, and Provocateurs, was published by Lyons Press on June 8.

Celia R said…
Nice work, Arlene - I knew his baseball work but not much more, and this brings him alive for me. Thank you!
8:05 PM