Before it shuttered last summer, Artemio (Poppa) Colon's Westside Gym on W. 163rd St. provided a safe haven for youngsters coming up in the murder, cocaine and heroin capital of NYC. 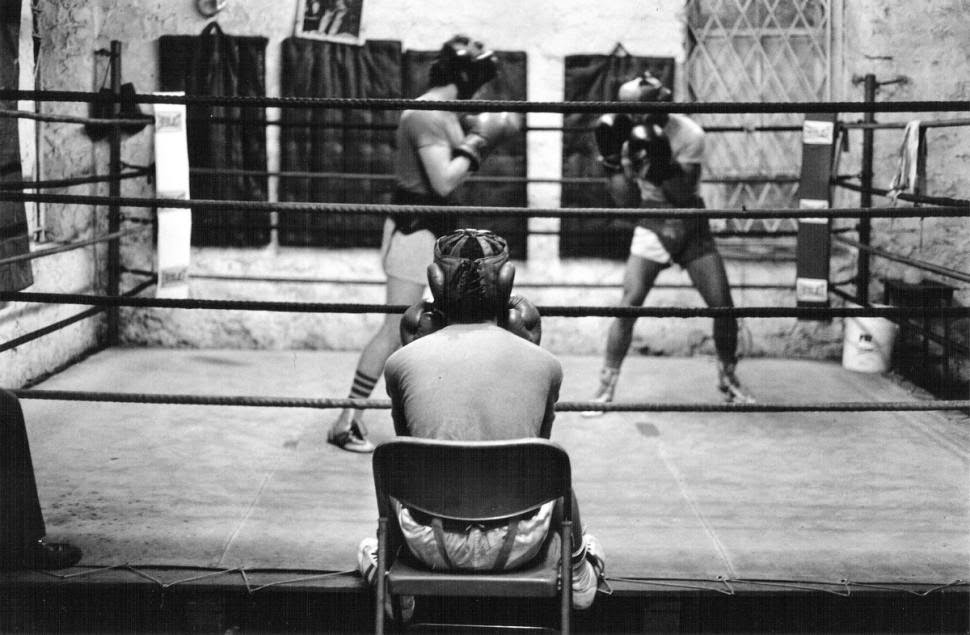 When gunshots rang out like the Wild West and Washington Heights was the murder, cocaine and heroin capital of the city, there was one place where fights ended someplace other than the morgue.
In an unassuming apartment building on W. 163rd St. between Broadway and St. Nicholas Ave. was the Westside Gym. For 55 years, a narrow, crumpled stairway led to Artemio Colon, known as “Poppa,” who opened the basement gym in 1959 with two boxing rings and a dream.
When time took its toll and the old man wasn’t able to navigate the steps, his son Artemio Jr. kept the operation going.
The gym closed last July, with little notice, a symbol of the marching gentrification in this neighborhood and throughout New York City.
"I trained a lot of people," said Colon, now 93, who still lives around the corner, across the street from an elm tree that predates the Revolutionary War. “They didn’t listen to their mother or nobody. But they listened to me.”
When the Westside Gym opened its doors, Robert F. Wagner served as mayor and a subway token cost 15 cents. In the grand tradition of neighborhood boxing gyms, guys from the Heights packed its subterranean warren of gray rooms, hitting the heavy bag, sparring, lifting weights and learning the ropes.

Artemio Colon, now 93 (r.), landed in New York in 1946 and trained under famed boxing sage Cus D’Amato. Colon (pictured in the 1980s, l.) opened his own gym in 1959, and built it into a staple in Washington Heights.
It didn’t matter whether they won or lost. It took them away from the lure of gangs, drugs and misbehavior, taught them discipline and gave them the sense that there were options.
When the boxing business was booming, there were several active neighborhood gyms in every borough. Connie’s Gym on 125th St., Brooklyn’s Red Hook Boxing Club and the Bronx’s Jerome Boxing Club were among the casualties of waning interest and higher rents. There’s nothing like the Westside Gym in Manhattan any longer.
“Community gyms help kids in the neighborhood,” said Bruce Silverglade, the owner of Gleason’s Gym in Brooklyn. “They are not a place where pros go. These mom-and-pop gyms are stabilizing centers in disruptive areas.”
When the tidal wave of drugs and murders disrupted the neighborhood in the 1980s and 1990s, Colon provided a place where young men could find a safe corner.
“It was a little scary,” recalled Anthony James, a two-time Daily News Golden Gloves winner who trained there during the 1980s. “Guys were always selling drugs on that block out in the open, and people were always getting shot. Washington Heights was definitely out of control. But, he added, “If you were with the gym, no one bothered you.”


The diminutive Colon barred drug dealers, gang members, and other unsavory characters.
“No drugs in the gym,” Colon said firmly. “We never deal with them. I kept the street clean in front and let no one hang out. Even the kids never played ball here. No barbecuing. You have to move.”
The gym was considered sacred. Outsiders never intruded. Even the NYPD knew not to expect any trouble.
“I don’t recall any problems there,” said Deputy Inspector Wilson Aramboles, who covered Washington Heights as an anti-crime officer in the early 1990s. “The gym made a little dent in crime back then.”
NYPD Captain Ernest Morales, one of hundreds who trained at the Westside Gym said it “represented what it meant to fight your way out of poverty to fulfill the American Dream,” a safe haven for generations of children in the rough-and-tumble tracts.

If you were with the gym, no one bothered you.

Fighters and neighbors alike still mourn the fact that Colon had to close his sanctum down.
With crime in the city down overall, it’s difficult to determine what impact, if any, the gym’s loss will have. There were only two murders last year in the 33rd Precinct, which covers the neighborhood.
But if the major crimes are harder to detect, so are the men (and later, a few women) who walked down the block with a singular purpose.
“Everyone has gone to Planet Fitness,” James said. “Boxing is not what it used to be. We all get old. Colon can’t do it forever.”
Silverglade, who oversaw the moving of Gleason’s Gym from 30th St. in Manhattan to Brooklyn’s DUMBO neighborhood in 1984 due to rising rent, said it’s gotten harder and harder for gyms to stay on their feet.


“Insurance is extremely expensive,” he said. “Rents are going up. The cost of training is going up. At one time, there were a lot of bootleg shows and gyms could run shows and make a small profit. Now, there are so many rules and regulations combined with the economy make it difficult for small gyms to survive.”
Gleason’s, like the Times Square Gym, had a heavy roster of professional fighters training and sparring but added fitness training, women’s boxing, and white collar boxing some time ago.
“If I was relying on actual boxers, I would never be able to survive,” Silverglade said. “The big fitness chains are in competition with the boxing clubs. As people are getting older they don’t remember the value of boxing. They go into Equinox and the other new places. And the gym owners,” he added, “are getting older. I’m here at five in the morning and I leave at seven at night. And we don’t have those trainers like Artie Colon and Ray Arcel around anymore.”
Colon landed in New York City in 1946, just after World War II and ahead of the the “great migration” of Puerto Ricans who arrived in New York City a decade later.
Armed with an eighth-grade education and a wiry physique honed in the tobacco and sugar cane fields, the 25-year-old found work as a cook at Luchow’s, a famous German restaurant on 14th Street, as a tailor and then, finally, as a building superintendent.

Everyone has gone to Planet Fitness; boxing is not what it used to be.

He discovered the Gramercy Gym and trained under Cus D’Amato, the mentor of world champions Floyd Patterson and Jose Torres and, later, Mike Tyson.
“Boxing made me what I am,” Colon said. “I traveled all around the world. Cus taught me how to box, how to take care of myself. He was like a father to me. Whatever I knew in boxing, he teach me.”
Later, while running his own gym and shuttling fighters to matches around the city, Colon served as the super of the gym’s building. So long as floors were mopped, the repairs made, the boiler fixed, the gym was his.
The block is quieter now; it’s as if the gym has been erased. The steps down to the basement have been straightened, and the sign removed. The space is being converted into yet more apartments, and a building across the street is now a high-priced co-op, which neighbors call the “white building” because only white people, they say, can afford to live there.
Dario Rosario, 78, who mopped up blood in the New York-Presbyterian/Columbia University Medical Center emergency room night after night during the '80s and '90s, has lived at the corner of 163rd and St. Nicholas since 1967. He misses the gym. “That's the only thing we had here,” he said. “Now they are smoking marijuana in front of the building.”