Pedro Sierra: One of the last Negro League pitchers persisted for the love of the game

Pedro Sierra poses on a concrete mound facing an imaginary batter. He tucks a baseball into his palm, hands as large as catcher’s mitts, setting up pitches based on physics, syncopation and deception. As his windup begins, his dark 82-year-old eyes fix on his intended victim like a cat ready to ambush a mouse.

Hands above his head, the pitch is a mystery to onlookers until it reaches his opponent in a pugilistic style that takes him back to ballfields cluttered with rocks and thorny bushes in Cuba, where he first played the game. Almost every kid played baseball in Havana, including Sierra who was 5 or 6 when he first grabbed a stick and hit a worn ball. 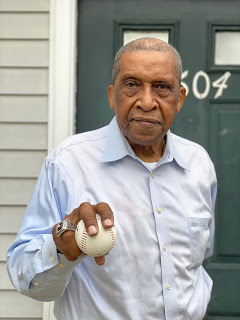 “There were so many people who played baseball,” he recalls, listening to Miles Davis in his two-bedroom, poster-filled home in Mays Landing. “It was in our blood. Rafael Almeida, Armando Marsans. They were the talk of the neighborhood. … I wanted to be like them.”

His neighborhood in Havana was once saturated with prizefighters, baseball players and musicians, the smell of cigars and beats of son, mambo and rumba. Families like Sierra’s were squished into one-room tenements with toilets and washing stalls outside. A shower was a bucket of water heated up on the stove. Sierra, the son of a welterweight contender named Perico who shined shoes, was too small to box, instead, he found his music in baseball. So, he headed to the United States, where local heroes had gone to play the sport.