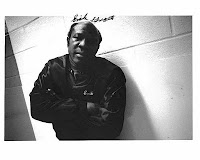 I remember the former world boxing champion Emile Griffith as a gregarious and gentle man, quick to greet fan, former foe and friend with a handshake and a version of the male hug—a pat on the back—yet shy and guarded about his personal life. He carried the burden of killing a man in the boxing ring, an incident that seems incongruous to a man whose informal bearing and musical lilt from the Virgin Islands didn’t quite transport him to the legends of his tough championship fights.

Sometimes his eyes looked pained, his brow furrowed into lines like snakes as if he were asking, “Why?”
Griffith trained fighters at the old Times Square Gym on 42nd Street, where the small gym on the second floor smelled of perspiration, desperation and hard work of champions and contenders who were counseled, trained and molded in a grimy ring with loose ropes, worn floorboards, and trainers shouting out commands against the din of fighters hitting the speed bag, managers cutting deals, and a small crowd of onlookers chattering about upcoming fight cards.
Griffith wasn’t very good at recalling names. We encountered each other many times over a 10-year period at the Times Square Gym or at local fights at Madison Square Garden during my years as a writer covering boxing and he would call out a cheerful and welcoming "Hello, young lady!" His life was as a man devoted to his mother who once wore huge creations of hats when she cheered him on during his fights and as a man who enjoyed the company of both men and women was not a subject of conversation by him and by others. He was just Emile and he lived his own life, no discussion, no disclaimers, no revelations.
Ring 8, an association that honors and helps support veteran boxers, held its annual dinner a couple of weeks ago. Emile Griffith sat on the dais, directly in front of my date and me. I hadn’t seen him in 20 years. Now, at the age of 72, they say he suffers from pugilistic dementia but I had hope that I might catch a glimpse of the old Emile. His face was unlined, his sturdy frame smaller. I searched for a signal, a blink, and a glimmer of recognition behind his dark eyes of someone from the old days. He stared back at me, eyes empty, his face blank.
A man seated next to him at the long table filled with boxing champions stood up and cut Griffith's main entrée of steak for him. Griffith poked at small pieces of meat with his fork and moved slowly to his mouth, carefully chewing and then swallowing and staring straight ahead.

Emile Griffith signed his first name to a photograph and stopped. "What about your last name?," I prompted gently. He looked up and then back down at a black and white image of him from years gone by and slowly added his last name in simple script. He put the marker down and pushed the photograph back to me.