Cat. No Hat. Oh, the things that go on in the subway!

The A train has its share of performers, from the agile teenage boys who shout “Showtime!” and set up a boombox for breakdancing and hit the ceiling with a startling kick, a parade of people begging for money in various states of dress with some shoeless and adorned with a perfume of the ages, rabid preachers, guitarists in sombreros and leather boots. . .they’ve become a staple of the ride.

The preachers are the most annoying as they shout to save us from salvation and a fiery ending. Apparently, we are all sinners. I’ve decided that the next time one shouts out for redemption in my subway car, I’m going to direct him to the next one with an impassioned plea: “Thank you but we’re all saved in this car. But look at those poor souls in the car next to us. They need to hear you. Look! They’re waving. I can hear them calling you. Better rush over!”

But there was no preacher on this Tuesday evening in May, about nine in the evening, An African-American man, maybe about 60 or so, dressed in a clean t-shirt and jeans and wearing sneakers, yelled into my ear. Not intentionally. He might not have seen me even though I stood next to him. You know how this goes.

“I’m sorry I have to yell but you have to hear me!”

I cringed and changed from the pole position to nearer the closed subway car door. Two men sitting on the sherbet orange seats smiled at me in sympathy. But they didn’t offer me their seats, it should be noted.

Another evening on the uptown A train.

He walked up and down the car.

A chunky man sitting in a corner seat stood up, his face red, and pointed angrily. The diversion was startling.

By this time, I had crossed to the door on the opposite side of the train and ended up in the direct path of these two.

The man asking for help walked over and yelled back, standing by the pole which was swiftly vacated.

"I don't want to hear this!" the other man shouted back. "You're lying!"

The man requesting assistance raised his hands and his fists. The other man sat down.

A woman who appeared to be his wife came between them and gently pushed her husband back.

Was this going to be a rumble? What should we do? We didn’t move, fixated on the two combatants. No one stepped in to break it up, even though there were men, younger and older, bigger and stronger.

There was no place to go because we were moving between 59th and 125th Streets, the longest part of the trip.

“It isn’t worth it,” I said to her in a low voice, envisioning the two of them locked up in Central Booking for a fight they hadn’t expected and leaving their two children without parents for at least a night.  I couldn’t think of anything diplomatic or even humorous to say, because, like my fellow travelers, I was afraid that the anger would take a turn and be directed at me.

“I don’t want to hear this!” the second man shouted again, his face turning red. He was a doughy guy who didn’t seem to present much of an opponent, even for me. Our fellow passengers looked alarmed and one woman stood up and nervously stuffed some money into the beggar’s hand, perhaps hoping he would go away.

“I’m going to light you up!” he shouted. “I’m a Viet Nam vet!I served this country.”

He pulled out his wallet and held up a card that not one us could read, but I imagined it was an identification card attesting to his status.

“I have lung cancer. I’m gonna light you up!”

A younger African-American man walked over and the two men fist bumped.

The wife noted, “He's’ going to help you out,” she said loudly to her husband.

But the indignity of having to beg strangers for money coupled with a challenge apparently was more than he could bear. His wife pushed him out the door when the train finally arrived into the station. He cursed at his new enemy as the train pulled away.

The crowd still looked nervous, perplexed at the exchange and what would or could happen next. The antagonizer still sat with us when the door closed and the A train left the station.

“Hey, everyone!” I called out from my spot facing the crowd, hoping to lighten the mood. “I have cat pictures!”

I held up my cellphone, a headshot of a contemplative white cat named George looking into the camera, one of three white house cats who lived with a friend in Philadelphia.

My train companions looked startled at first and then smiled and laughed. The man sitting in the corner had no reaction. Just my luck, I thought to myself, he’s probably getting out at my stop.

When the train stopped at Dyckman Street, he stood up to get out.  I walked behind him as he went right and I went left. Up the stairs and onto the street.

George the cat lives on as a screen shot on my computer and now on the Internet, for all to see. And that is that. 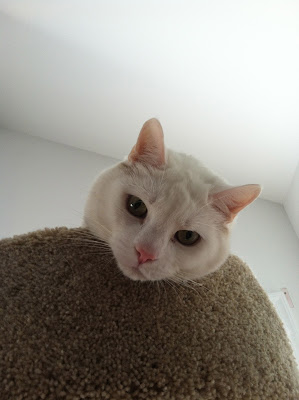