If it's not one thing, it's another: The Subject is Papasito

New York City isn’t a quiet place, filled with blasting, blaring, banging, beeping, barking, revving, rumbling, rattling, honking, clomping, yelling, shouting, shooting, laughing, screaming, squealing, stomping, smashing, screeching, slamming, and trilling.
Once in a while the night is so filled without noise that the only sound is the a capella crescendo of high heels on sidewalks.
New Yorkers expect, and are part of, a certain amount of cacophony during the day. But when beats of music, revving of cars and motorcycles, and cackles from gaggles of people underneath your bedroom windows leave you counting sheep and carrots (some of us are vegetarians), then the sounds of the city become an intrusion.
Several restaurants in Inwood have rattled neighbors since they opened. In one two-block radius, five restaurants and one bar are thriving (the diner is closed for renovations and five small storefronts are empty), serving food and drink indoors and outdoors. La Marina at the far end of Dyckman Street brings its own issues of traffic congestion, crowds, parking, and fire hydrants blocked by parked cars.
Business is booming and that’s the problem. The influx of diners means crowds gather outside of the restaurants during the day, in the evening, and early morning hours while each eatery plays music, sometimes emphatic enough to be heard across the street and up the hill.
People travel out of their own neighborhoods and into others to dine out, and upper Manhattan is now a destination. Dyckman Street used to be shabby and quiet. Some liked it that way. But when restaurants inhabited quiet streets and vacant storefronts, the unique topography of the street—a quiet hum of parkland sitting across the road and little or no street traffic that could serve as background noise—combined with elbow to elbow outdoor seating underneath large apartment buildings, changed the dynamics and annoyed the neighbors.
Inwood’s restaurant row is filled with diners eating and drinking, coming and going, and sidewalk space allocated for outdoor seating has been calculated by the Department of Consumer Affairs as being adequate for the width of the street. But what is adequate on paper is a mechanical computation, and restaurants seemed to have forgotten that people make their homes above them and an unpalatable sensory takeover has been added to their menus.
A sound meter measures the loudness of music—whether it’s Elvis Martinez or Elvis Presley, Frankie Ruiz or Frankie Valli, Barry Manilow or Barry White, Ella Fitzgerald or El Chombo, Bob Marley or Barbra Streisand, Milly Quezada or Millie Small—not how it travels, its effect on people and how it attracts an audience, and how it’s supplemented by the sounds of couples and groups of people conversing as they wait in line or walking on by, others congregating outside and across the street. 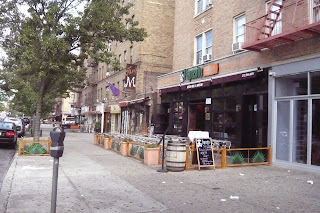 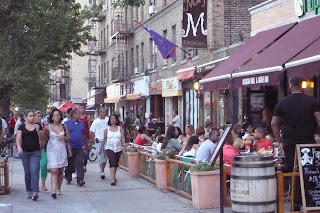 Neighbors are circulating a petition advocating that the liquor license of one of these restaurants, Papasito Mexican Grill and Agave Bar, not be renewed by the New York State Liquor Authority because of the loudness of music, crowds, lack of crowd control, fights, public urination, and dancing in violation of its liquor license. According to Papasito, its bar is open until three in the morning during the week and on Saturdays and until two in the morning on Sundays. The other restaurants say they close earlier. Neighbors complain that Papasito stays open past its legal closing time. Sunday, which was once considered a day of rest, seems to be the busiest day of the week. Papasito  is countering back with its own petition and now has signs posted  “no dancing allowed.”  A wiggle of the hips in the uptown version of Footloose and witnessed by an investigator with the State Liquor Authority is a serious violation and could close the restaurant.

But removing Papasito’s liquor license means that it will likely close. Perhaps the removal of its liquor license is sending a message. But this seems severe, and throwing people out of work in this economic climate is not something to toast. There’s no guarantee of what business would replace it and the level of respect this new venture may have for the neighbors upstairs. And then the dance begins all over again.
Why not work with what you have? Not every patron who is loud and boisterous (and not everyone is) on Dyckman Street is dining or drinking at Papasito. On the few nights during the week I passed by at different times, the outdoor scene was relaxed and comfortable with no music or music playing very low. It’s the late nights/early morning hours on the weekends when the temperatures rise to a boil. 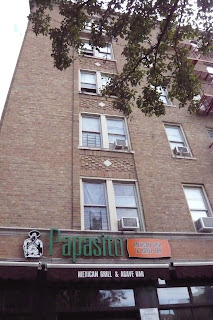 The issue of noise is a contentious one and a middle ground of dialogue would benefits both sides of the dinner table, if you will. If Papasito and any other restaurant that is part of the Inwood diaspora expects to be a part of the community, perhaps they could cut back restaurant and bar hours to midnight and open an hour earlier; lower music and remove the bass to a level that is amenable to the neighbors; install soundproof windows in apartments of those living above and nearby; cut outdoor seating by a third; offer a 20% discount to neighbors living above and nearby; organize and expedite a BID (Business Improvement District); participate in the community by contributing to or establishing a fund to improve nearby parks; hire confident and friendly managers and private security to move people and their vehicles in, out, around, and along; remind customers to use safe and reliable public transportation whenever possible; and meet regularly as a group of business owners and neighbors to discuss situations and concerns and work with a professional mediator to resolve the issues. And for the community, could there be an acceptance of the fact that there will be some noise from restaurants and patrons and that the businesses are part of the community?
Somehow, both sides—restaurants and neighbors—must find a way to connect and follow the spirit of the law and of community to find a middle ground. Everyone in New York City isn’t going to be happy, which is why chefs fiddle with menus and adapt them to their customers and why, when New York City changes, it never stays the same.
Email Post
Labels: Dyckman Street Inwood La Marina music Papasito State Liquor Authority Upper Manhattan

Michael Carozza said…
I like your idea;however,I think that more drastic action needs to be taken. Vida Mexicana wants to open yet another liquor serving establishment at 251-253 Dyckman.
These are the stores that used to house Nostalgia and Brazen Lingerie.In addition, Williams Grocery is planning on opening a liquor store next to their grocery.On my way home from work, I counted five liquor serving establishments between Broadway and Seaman avenue(The Dyckaman Bar,Papasitos,Il Sole,Corcho, and Mama Sushi. If you add the new businesses that are planning on opening up between Seaman and Payson and Cafe Mamajuana, there would be eight liquor serving establishments between Broadway and Payson. This is not even counting La Marina( which is supposedly owned by vida Mexicana as well. These businesses are directly contributing to the deterioration of the quality of life in this neighborhood. On my way home last night at one thirty,the noise from the clubs,cars and motorcycles and club patrons could be heard as soon as I approached Beak and Payson. This is too much. Something needs to be done to put this corporations feet to the flame. I feel that these new establishments should not be allowed to open and the current ones should be forced to close by two thirty on Saturday evening and one thirty on Sunday evening. If there is a petition out there that is addressing the issues I discussed, I would gladly sign on the dotted line!
8:09 PM